The Wines of Umbria! 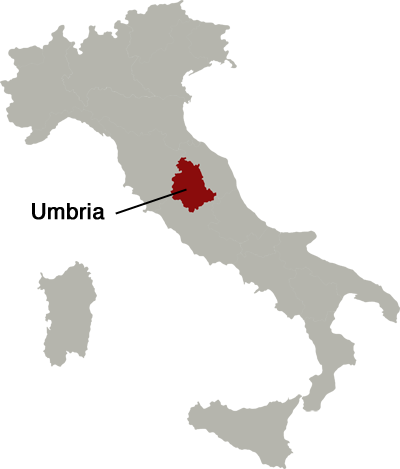 Located in central Italy, north of Rome and south of Florence, Umbria enjoys a very unique geological history with soil profiles that make for notable native wine varietals.  Umbria lies just west of the Apennine mountain range and is bordered by Tuscany to the west, Marche to the east, and Lazio to the south.  Tectonic plate movement millions of years ago has created rich soils around the towns of Orvieto and Montefalco.  The notable white varietals include Grechetto di Todi and Grechetto di Orvieto, which are commonly blended to produce DOC Grechetto. Additionally, the wonderfully complex  DOC Trebbiano Spoletino is grown in Spoleto. The hillsides around the village of Montefalco are the home of the big red varietal, DOCG Sagrantino.  All three varietals receive a great deal of interest due to their believed to be antiquity; however the most widely planted varietal in Umbria is Sangiovese, and makes up the primary varietal in DOC Montefalco Rosso. (Italian Wine Central) 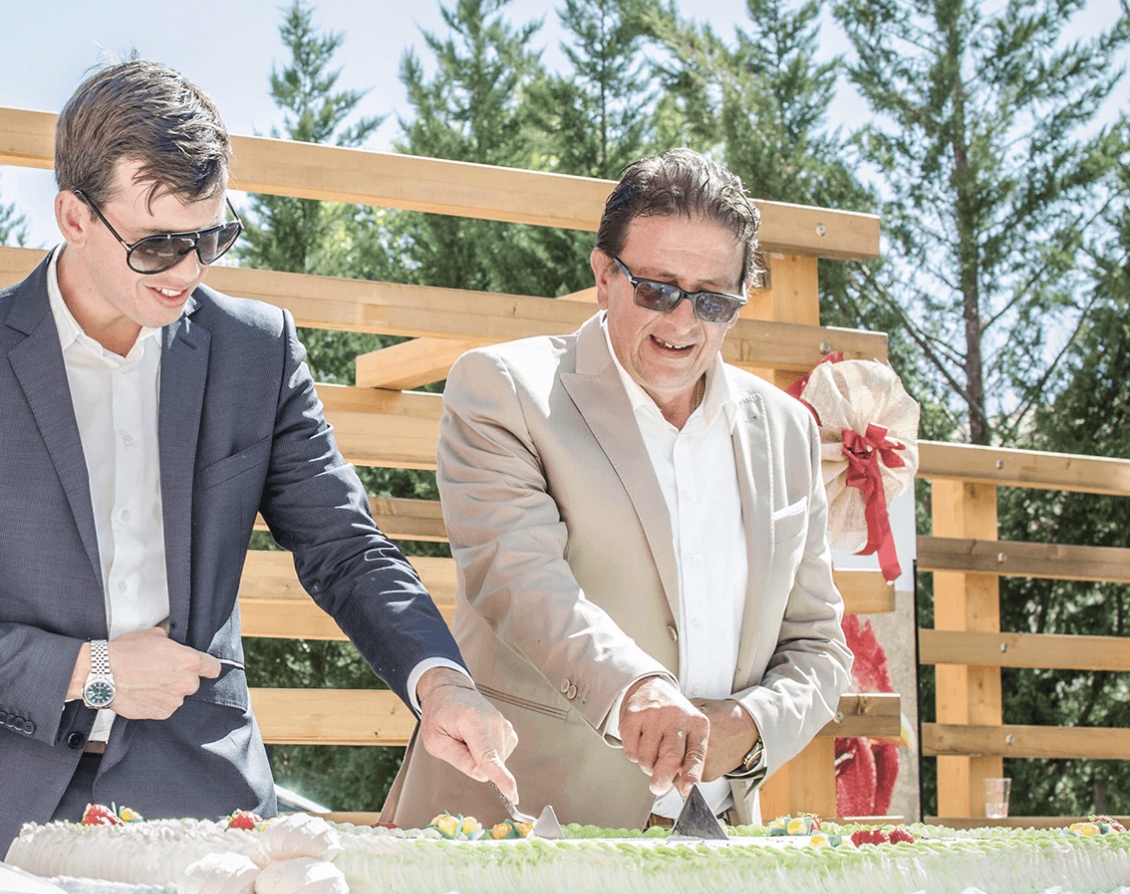 This is a story of two families with a long history of success in agriculture who came together with a shared vision—create exceptional Umbrian varietal wines.  Umberto Benedetti and Daniele Grigi joined forces, built a team of exceptional talent in viniculture, winemaking, and gave them the best vineyards and equipment available.  Their 68 hectares (~160 acres)  on the Montefalco hillsides are located in close proximity to Limigiano Castle. The estate was once part of the lands belonging to an Ancient Roman villa built in around 600 AD. The villa was renowned for its baths, Limes Janii, with its sulphur springs which still exist today and are believed to have powerful sanitizing properties. The Benedictine Abbey dedicated to St. Michael the Archangel is located inside its walls. This area is characterized by clay-rich, structured soil. Located at around 400 meters above sea level, the well ventilated climate ensures healthy and optimal grape growth. Fruit from the higher elevation, older vineyards (Castello di Limigiano) are u 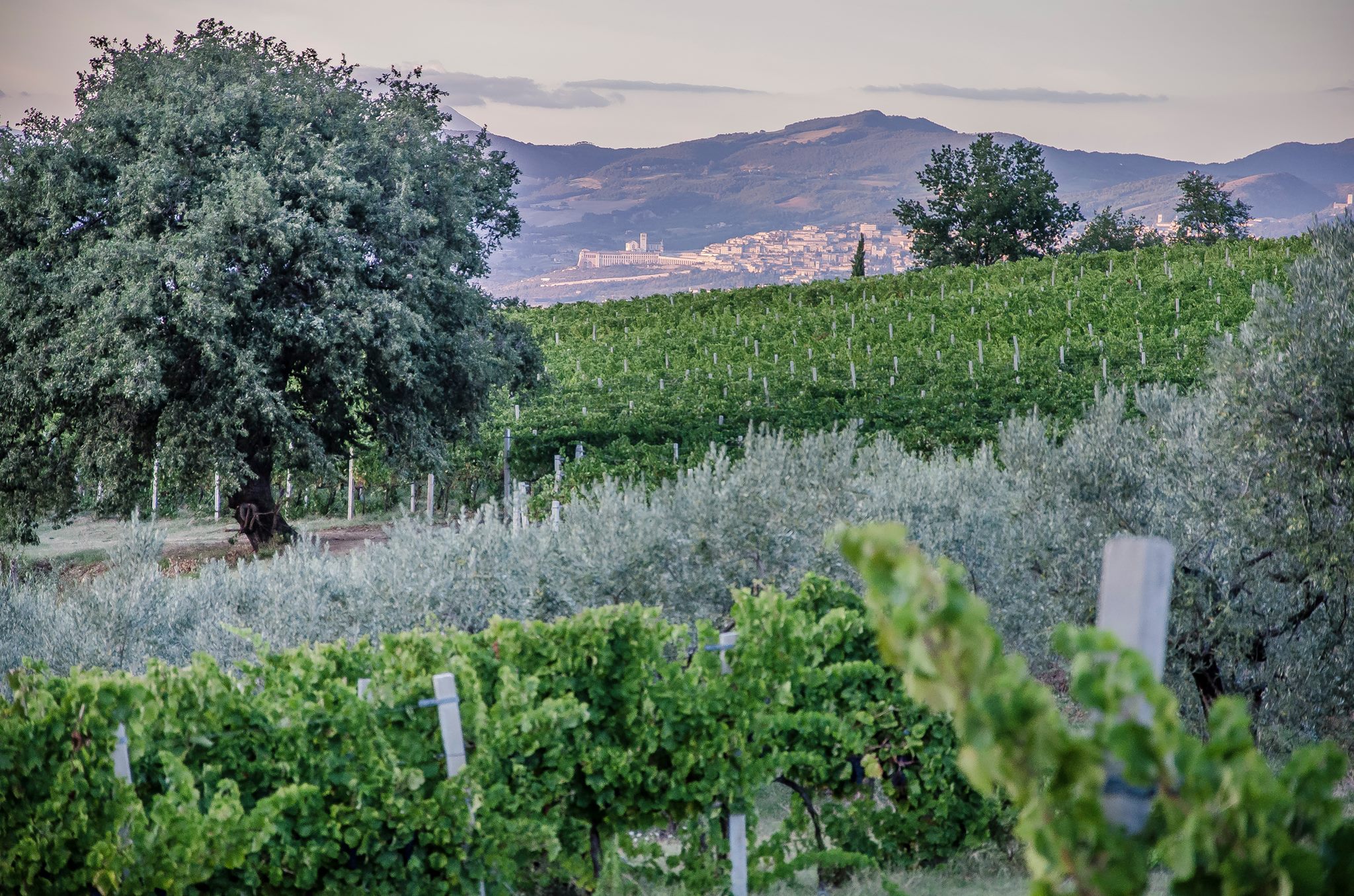 tilized to produce Umbrian wines under the Benedetti & Grigi label, while the younger, lower elevation vineyards at 200-300 meters (Terre dell'Abate) are harvested to produce wines under the La Gaita del Falco label.  The cantina is located in La Polzella, just 4 km outside the ancient hilltop town of Montefalco.  In-house winemaker, Matteo Basili, has the finest equipment at his disposal to create wines that perfectly express the best natural characteristics of this historic region.

DOCG Montefalco Sagrantino -This ancient varietal was originally a sweet wine made in the "passito" style and enjoyed during feasts.  The name is believed to be derived from "sagra" which means "feast". Another belief is that the names derives from "sacr 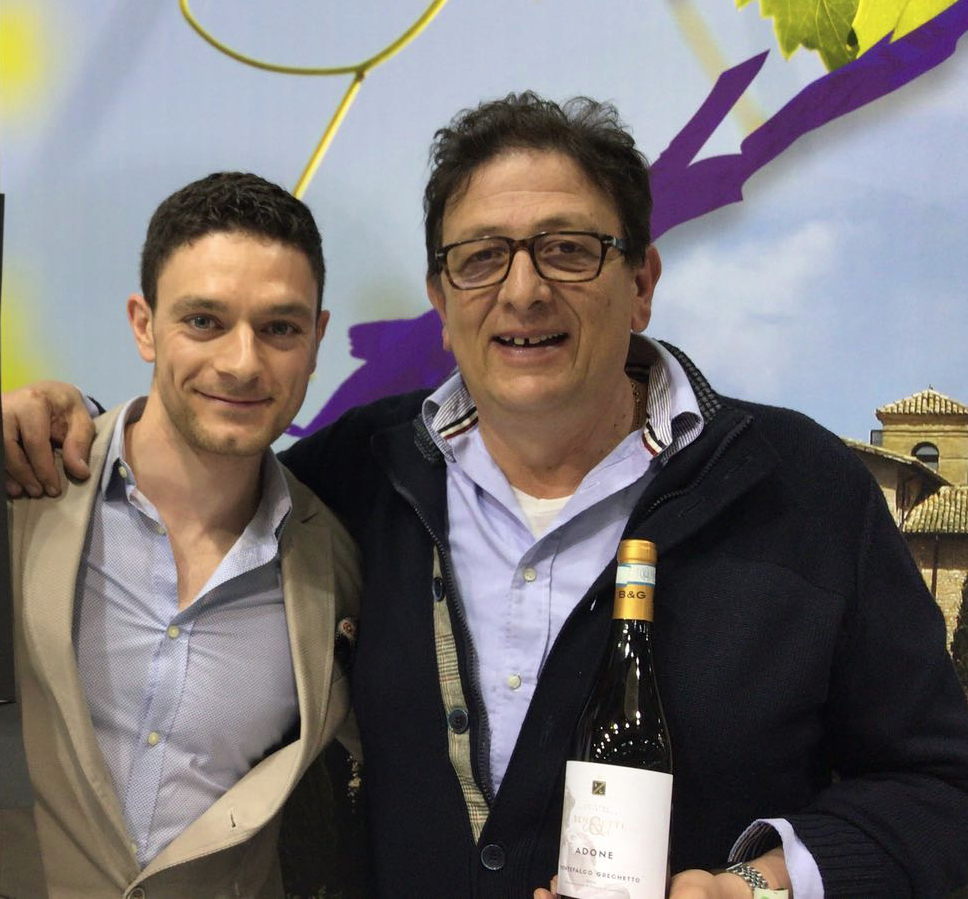 estia" or sacrament and was drank during religious﻿ ceremonies. (D'Agata)  In any case, Sagrantino is believed to be an autochthonous (indigenous to the area) varietal. Sagrantino thrives in the clay-rich soils around Montefaclo and produces a dry wine that is highly tannic yet structured.  It takes several years of refinement in oak and additional time in the bottle to tame these bold tannins, but when released, the wine is soft, balanced and intensely complex. Bright crimson in color, an intensely complex aroma of ripe red fruit, nutmeg, pepper and cocoa precede a subtly spicy finish. The tamed tannins are soft and silky on the palate.

DOC Grechetto- The hills around the Umbrian village of Orvieto are covered with vineyards of Grechetto.  As the name might imply, the varietal is believed to be of Greek origins.  Two distinct varietals are grown--Grechetto di Todi and Grechetto di Orvieto.  There is some debate as to whether they are distinct varietals or clones of the same varietal. (D'Agata) They are commonly planted alongside each other and if not blended during crush and maceration, they are blended post maceration.

varietals found in Umbria to near extinction, as the vines which were slow to ripen and required manual pruning were replaced with more compliant and easier to cultivate varietals.  The varietal has enjoyed a revival since a few growers and winemakers demonstrated that, when cultivated properly, and given time for development, the fruit produced wines of intense complexity and aromas. Umberto shared his initial doubts about Spoleto and how he came to believe in its place in Umbrian wines... "Undaunted by seemingly endless bureaucracy, these shareholders, past their prime and with weather-beaten faces, passionately fought for recognition of this variety. I joined them and fell in love with the aromas and complexity of this wine, however diffidence among others was rife, they would say: “It will never be successful, it’s called Trebbiano and people will associate with low-level wine”. It took 20 years, many producers died without ever seeing their dream come true, however at last, also thanks to enlightened businessmen who generously invested in this wine, Trebbiano Spoletino has returned to the spotlight with increasing ranks of admirers. I wish to dedicate our Spoletino to those men who first introduced me to it and gave me the chance to love it: their names will never make history annals but they shall be forever engraved in my heart.” – Umberto Benedetti
I recently joined KSRO's Steve Jaxon and Dan Berger on California Wine Country Podcast to talk about these delicious wines.  Click on the link below to listen.
Listen to California Wine County